The prolonged low levels created pond-like conditions particularly in Casemill leat. Towards the end of the drought there was an extensive raft of Canadian pondweed across the whole width and for a quarter of its length. This is never normally a river species. The swans have in fact taken to grazing it lately on a daily basis.

While weedkilling the Casemill it was impossible to count the number of tree saplings – willow, alder and buddleia – that needed treatment, all around 1 ft high. Having just sprayed a patch of them I noticed one that had leaves that I did not recognise. It was too late, already sprayed, but I wanted to ID it so I removed all of its leaves to reduce roundup absorption and washed the plant thoroughly with clean water to remove what I could.

A long story followed, where I sent the leaves to Kew garden experts for ID along with photos of the plant in situ. Their considered reply was that the senior botanist was unable to ID it! About 6 weeks later we had a result – it is a London Plane: the juvenile leaves had made it unfamiliar. They are uncommon trees in the wild, but there is one in Ludlow, on the Whitcliffe road just past the first layby on the right. Perhaps a seed from this had found its way into the river. I then extracted it from the weir and potted it up to give it a chance to survive. It would not have survived a flood.

The Otters have been giving a lot of entertainment to the public at Mill st weir and also to myself, more privately, at Casemill where I photographed a pair a week ago.

There have been reports of Mink from various sites to me, although not seen by me so far. Terry also reports a Water Shrew in the leat below the Casemill, not a very rare mammal, but certainly rarely observed in the wild.

After the sluice-gate opening at Mill St there were a large number of young eels seen over the gravel island below, possibly having come down through the gates. They are a particular favourite with the Herons and Otters and I believe we have a healthy population in the Teme here.

A good number of brown trout and Grayling have been caught and released at Mill St and Casemill recently so stocks are reasonably high. Many trout are also seen leaping at the weirs when the salmon are also leaping.

At Mill st during the drought in July I photographed thousands of adult minnows in a vast shoal taking up the whole area of the leat above the sluicegates, the largest collection of minnows I’ve ever witnessed and again an indication of the river’s good health.

The salmon started moving on 16 Oct, seen leaping at Casemill and Mill st after a spell of rain and for the following month they have been seen at both weirs on most days. Even with the works in progress at Mill st, there has been no evidence that they have been held up significantly, and each day the fish from the day before will have ascended overnight. So far there have been two runs, corresponding with the rainstorms and a lot of fish have already moved up already. However, it is still early days in their calendar and a further heavy rainfall could still produce a significant final run.

Moorhens are seen to be doing well this year and seen on all weirs, with 7 regularly seen together at Mill st. I’m encouraged to believe that the programme to control the hatching of the LBBs’ eggs has reduced pressure on all of the water birds and their broods this year.

Dippers have bred successfully on all weirs and Grey Wagtails have also bred again. Kingfishers are abundant and invariably seen at a 10-minute pause by the riverside.

Herons are a fixture on all weirs now and seem to have an insatiable appetite for eels and small trout.

Cormorants are regular visitors and reflect the abundant supply of fish available to predatory birds.

The swans are in disgrace this year. After a successful hatch of 6 eggs in May, to 6 cygnets, they left the nest in excellent conditions, but after two days they had lost one and then they disappeared downstream well away from my observation. I had few reports of them, with decreasing numbers of cygnets each time. The pair returned on 12th Sept without a single cygnet in tow. Somehow they had lost them all in the river downstream and unseen by me or any other observers. I suspect that Mink will be the culprits but I have no proof, while the Gulls are unlikely to be a threat downstream where the swans spent the summer. 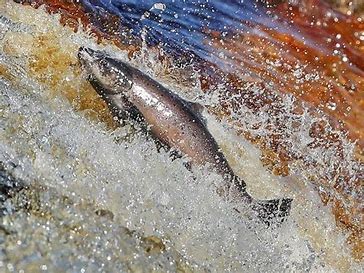